Powered by Frostbite™*, EA SPORTS™ FIFA 20 for Xbox One brings two sides of The World’s Game to life - the prestige of the professional stage and an all-new authentic street football experience in EA SPORTS VOLTA. FIFA 20 innovates across the game, FOOTBALL INTELLIGENCE unlocks an unprecedented platform for gameplay realism, FIFA Ultimate Team™ offers more ways to build your dream squad, and EA SPORTS VOLTA returns the game to the street, with an authentic form of small-sided football.

Skip to the end of the images gallery 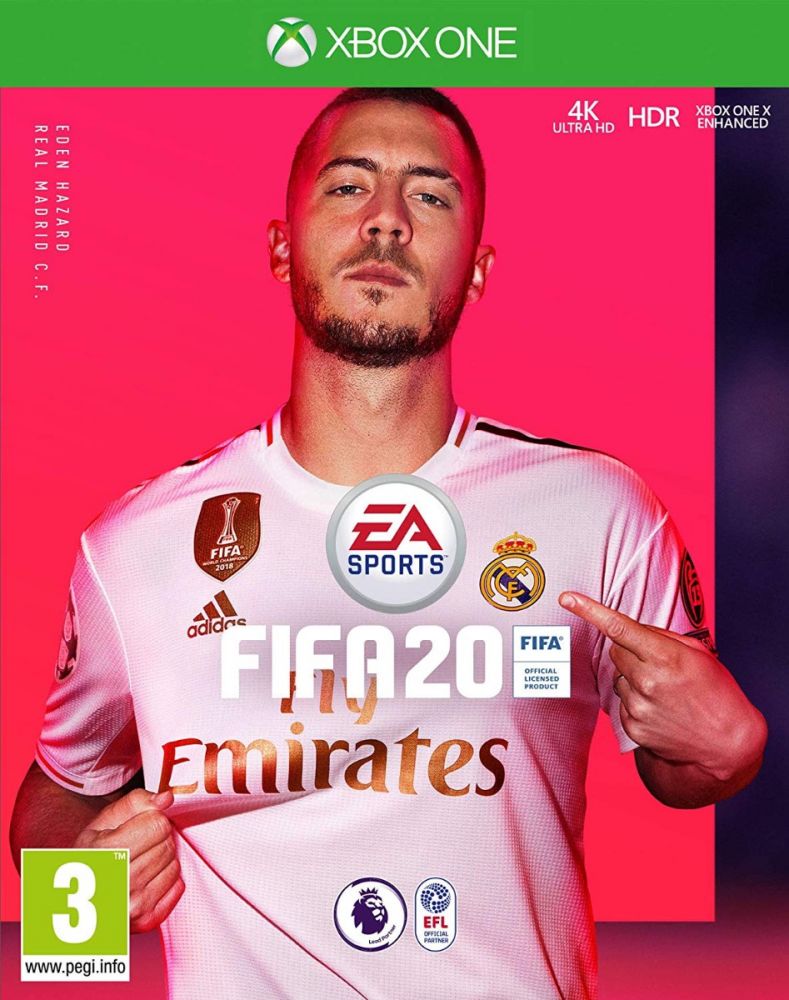 Powered by Frostbite™*, EA SPORTS™ FIFA 20 for Xbox One brings two sides of The World’s Game to life - the prestige of the professional stage and an all-new authentic street football experience in EA SPORTS VOLTA. FIFA 20 innovates across the game, FOOTBALL INTELLIGENCE unlocks an unprecedented platform for gameplay realism, FIFA Ultimate Team™ offers more ways to build your dream squad, and EA SPORTS VOLTA returns the game to the street, with an authentic form of small-sided football.

EA SPORTS VOLTA takes football back to the streets, representing the authentic culture, creativity and style of the small-sided game. Build your character, express your style, and play various forms of free flowing-football in environments all over the world.

VOLTA Gameplay: Express your style with an entirely new gameplay system, grounded in football realism. Inspired by the authentic small-sided form of football played in streets, cages, and futsal courts across the world; VOLTA gameplay offers new tools to immerse you in the flow of the street, including simplified flicks and skill moves, new flair animations, and even the option to use the wall as a teammate.

Experience FOOTBALL INTELLIGENCE, a complete rethink that unlocks an unprecedented platform of football realism. FOOTBALL INTELLIGENCE elevates every living moment on the pitch: on-the-ball, off-the-ball, and through-the-ball. Built on three core pillars: Decisive Moments (on-the-ball), Authentic Game Flow (off-the-ball), and Ball Physics (through-the-ball), this approach is intended to put the user at the centre of every match.

Authentic Game Flow: Awareness of time, space, and position are fundamental intelligences of world class footballers. With Authentic Game Flow every AI controlled player will operate in a manner that considers these components, delivering an environment that creates more time and space, putting greater emphasis on user-controlled play.

• AI Defending: an overhaul in the positioning and tackling system creates an environment for AI to better complement the user controlled player. AI will offer intelligent defensive support, while rewarding and advantaging user defending.

• Natural Player Motion: with locomotion and positioning innovations AI players move in a more natural and composed fashion than ever before creating realistic football movement for all players on the pitch.

Decisive Moments: Football is made up of a series of pivotal moments that determine the outcome of a match. From Composed Finishing in the final third to Controlled Tackling in the back, matches will be won or lost through user controlled Decisive Moments.

• Strafe Dribbling: the new-strafe dribble mechanic adds more dimension to attacking options; offering the ability to move with more agility than ever to lure your opponent in to then beat him on speed or skill.

• Controlled Tackling: Utilizing the Active Touch System, user controlled defending is advantaged and rewarded through a variety of new tackle animations. The cleaner the tackle, the higher the likelihood of players retaining possession of the ball.

• Set Piece Refresh: A system refresh that gives deeper options for aiming direct free kicks and penalties, introducing more skill-based mechanics for striking that are more rewarding than ever.

• Composed Finishing: An overhaul in the fundamentals of shooting will allow you to experience more consistent and clinical finishing. This creates a more true-to-life shooting experience that better rewards authentic finishing and offers risk and reward in more difficult situations like volleyed crosses.

• Football Informed Motion: an overhauled motion system introduces more authentic ball spins and bounces that play out with more realism than ever before. This creates a more true-to-life football experience.

• New Shot Trajectories: with the new ball motion system a variety of realistic shot trajectories are unlocked, from technically dipping shots to knuckleballs to swerved set-pieces and first-time rising shots.

The world's most prestigious club competitions, including the UEFA Champions League, Europa League, and Super Cup come to life again in FIFA 20 through authentic UEFA elements such as official broadcast overlays, kit badges, match balls, and the iconic trophies, and in a variety of game modes including FIFA 20 Ultimate Team, Career Mode, a standalone Champions League Mode, and more.